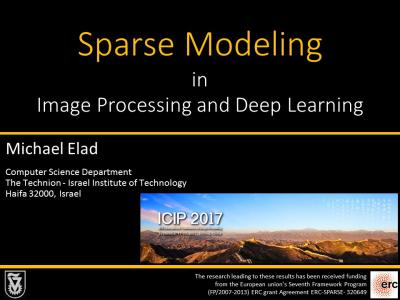 Sparse Modeling in Image Processing and Deep Learning
Sparse approximation is a well-established theory, with a profound impact on the fields of signal and image processing. In this talk we start by presenting this model and its features, and then turn to describe two special cases of it – the convolutional sparse coding (CSC) and its multi-layered version (ML-CSC). Amazingly, as we will carefully show, ML-CSC provides a solid theoretical foundation to … deep-learning. Alongside this main message of bringing a theoretical backbone to deep-learning, another central message that will accompany us throughout the talk: Generative models for describing data sources enable a systematic way to design algorithms, while also providing a complete mechanism for a theoretical analysis of these algorithms' performance. This talk is meant for newcomers to this field - no prior knowledge on sparse approximation is assumed.

Michael Elad holds a B.Sc. (1986), M.Sc. (1988) and D.Sc. (1997) in Electrical engineering from the Technion, Israel Institute of Technology. After several years in industrial research, Michael served as a research associate at Stanford University during 2001-2003, working closely with Prof. Gene Golub (CS), Prof. Peyman Milanfar (EE-UCSC), and Prof. David L. Donoho (Statistics). Since 2003 he holds a permanent faculty position in the Computer Science Department at the Technion. Michael works in the field of signal and image processing, specializing in particular on inverse problems and sparse representations. He has authored hundreds of technical publications in leading venues, many of which have led to exceptional impact. He is the author of the 2010's book "Sparse and Redundant Representations: From Theory to Applications in Signal and Image Processing", which is a leading publication in this field. He has served as an Associate Editor for IEEE-TIP (2007-2011), IEEE-TIT (2011-2014), ACHA (2012-2015), and SIAM Imaging Sciences - SIIMS (2010-2015). He held a senior editorial role for IEEE-SPL (2012-2014), and since January 2016, he is serving as the Editor-in-Chief for SIIMS. Michael received numerous teaching and research awards and grants. He was awarded an ERC advanced grant in 2013. He is the recipient of the 2008 and 2015 Henri Taub Prizes for academic excellence, and the 2010 Hershel-Rich prize for innovation. Michael is an IEEE Fellow since 2012.