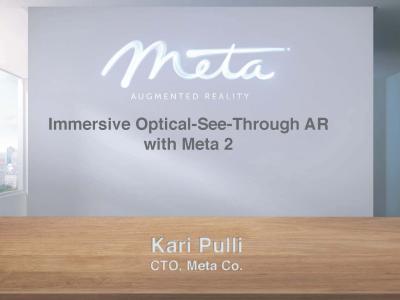 Immersive Optical-See-Through Augmented Reality. Augmented Reality has been getting ready for the last 20 years, and is finally becoming real, powered by progress in enabling technologies such as graphics, vision, sensors, and displays. In this talk I’ll provide a personal retrospective on my journey, working on all those enablers, getting ready for the coming AR revolution. At Meta, we are working on immersive optical-see-through AR headset, as well as the full software stack. We’ll discuss the differences of optical vs. video see-through displays, immersion, Meta 2 optics, and the key computer vision enablers for AR. We will finish with discussing the many possible applications that are enabled by wearable and immersive Augmented Reality.

Kari Pulli is CTO at Meta. Before joining Meta, Kari worked as CTO of the Imaging and Camera Technologies Group at Intel influencing the architecture of future IPUs. He was VP of Computational Imaging at Light and before that he led research teams at NVIDIA Research (Senior Director) and at Nokia Research (Nokia Fellow) on Computational Photography, Computer Vision, and Augmented Reality. He headed Nokia's graphics technology, and contributed to many Khronos and JCP mobile graphics and media standards, and wrote a book on mobile 3D graphics. Kari holds CS degrees from University of Minnesota (BSc), University of Oulu (MSc, Lic. Tech.), University of Washington (PhD); and an MBA from University of Oulu. He has taught and worked as a researcher at Stanford University, University of Oulu, and MIT.